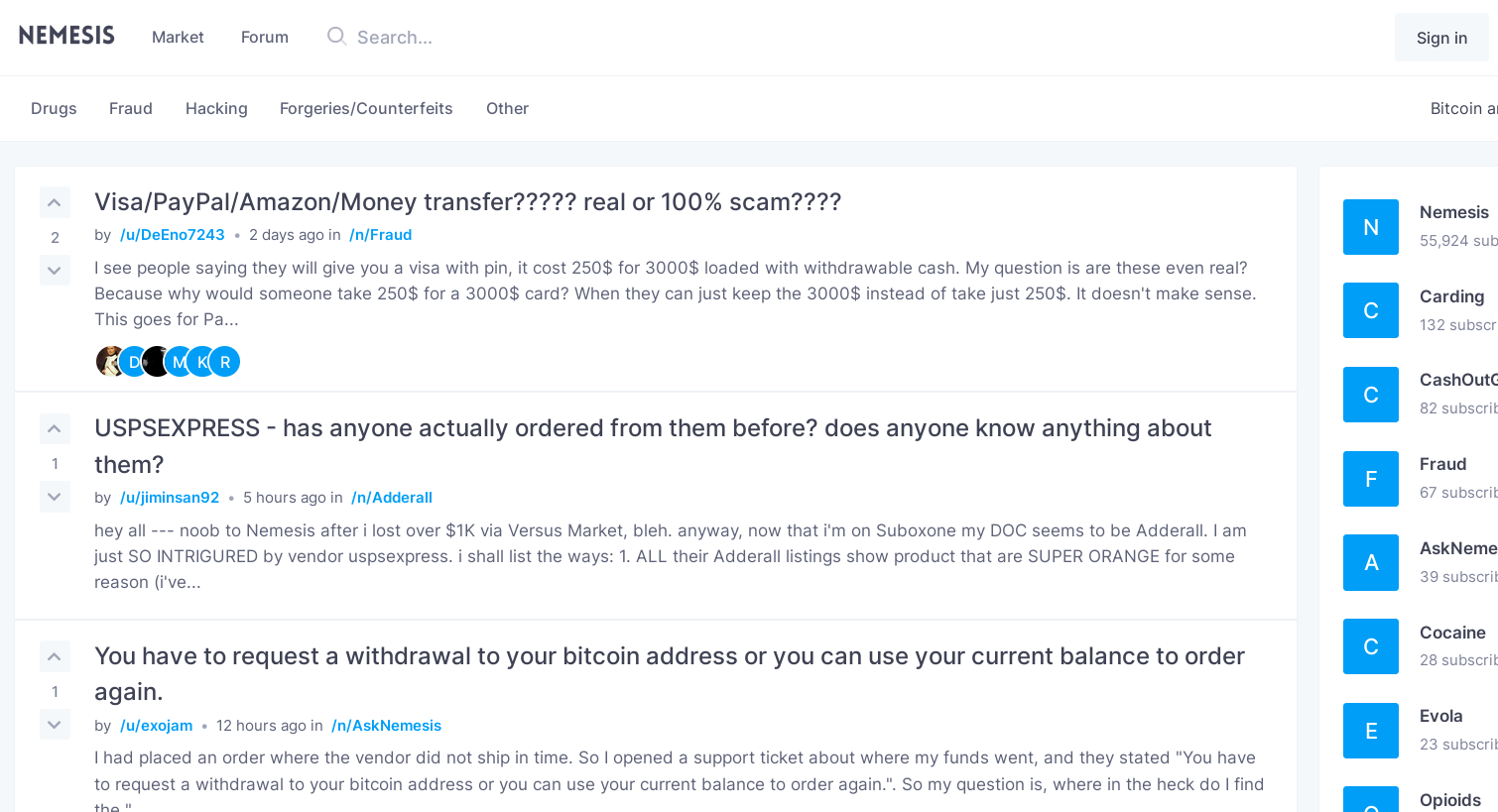 The dark web contains a plethora of markets for people brave enough to use it. Whether it’s for substances the state doesn’t permit or to get arms and ammunition without a license, this is the place to go.

Nemesis Market is new to the dark web market, and it offers an easy-to-navigate, uncluttered layout. Customers have been happy with the straightforward method of making purchases, too. Most sites on the dark web have a complex layout and difficult-to-reach vendors. The Nemesis Market creators are proud to introduce a site that novices, too, can use.

In addition to the typical advertisements for illegal substances and other cons, the easy-to-navigate design of Nemesis Market also features a mishmash of unusual ads that are accompanied by unusual explanations. There are now just a small number of customers that are ready to use the straightforward per-order payment option offered by the market, which only acknowledges XMR as valid payment.

The site currently has a few flaws. Most websites today come with a “dark mode” option, a reliable messaging system, and many more features that seem to be missing in the Nemesis Market. The administrators are privy to this and promise to work on making the site better catered to 21st-century users.

Some of the features that are anticipated to be introduced in the not-too-distant future include auto-withdrawal, dark mode, adding Bitcoin, adding Recon reviews, notification for comments, a better messaging system and forum, an exchange, correcting 2FA, adding a better search engine, and a lot more.

This is a fantastic spot to begin your search for anything that defies the conventional standards used with listings and descriptions. The one update to the site that keeps up with technology is that XMR vendors have more leeway to be inventive with the products they offer for sale. XMR, in its development, ensures users’ safety, privacy, and anonymity.

There is currently no method to trace a transaction to a particular Monero user, keeping the users safe from authorities. XMR also has no method to keep a documented record of users’ acquisitions in any form. Furthermore, there is no upper limit to the amount of the blocks that may be stored on a blockchain, which means that scalability is not an issue either. All of these features make XMR a safe currency to use for transactions.

If the administrators live up to their word and uphold their promises, it is anticipated that Nemesis Market would increase in popularity and garner a wider following. After all, it is a market with much-wanted substances and works to keep vendors and clients secure and their transactions hidden.

Banking Options at the Nemesis Market

Nemesis Market is the only dark web market that will take payments in Monero, in contrast to other markets that accept other cryptocurrencies. Blockchain-based currencies are the most sought-after payment methods used on the dark web, as they are secure and untraceable. Instead of going through a centralized wallet system, payments for orders are made directly to the given account address of the business that issued the order. After a customer’s order has been processed, the client can then pay out the remainder of the purchase to the respective vendor (minus the market fee).

Why Do People Prefer XMR:

The Flipside of The Payment Methods:

Due to the relatively small scale of the market, Nemesis does not have a large selection of products; however, it does have categories set up for items that may become less frequent by the end of the year 2022. The listings are organized into the following categories: drugs; fraud; hacking; forgeries and counterfeits; defense and intelligence. Each of these is then segmented into a variety of subcategories that are more specific.

Other Fraud is the largest subcategory, and it contains the standard how-to manuals that can be discovered practically anywhere else, even on darknet markets such as Silk Road and Silk Road 2.0. This is the subcategory that has the most products available. Along with a few data dumps and malware, the “hacker for hire” listings and services that Nemesis provides are extremely interesting. To put it another way, it is one of the few markets that still retains the “Wild West” atmosphere in which anything goes.

It’s critical to distinguish between “child pornography” and the more traditional definition of the term. Sexual exploitation of children is at the heart of child pornography, and each image serves as a visual reminder of past abuse. To create this image, every youngster involved has been sexually abused.

Child sexual abuse photographs may feature children who appear complacent, while some depict children who appear in extreme distress and the abuse is obvious. A child’s complacency does not mean that sexual abuse was not committed. As a rule, child pornography cases involve a pattern of victimization that extends over several months or years rather than a single incident.

Child pornography victims also suffer from the knowledge that their photographs can be exchanged and watched by others throughout the world, in addition to the sexual assault they endure to generate child pornography. An image can never be retrieved from the Internet once it has been posted, and it can be recirculated indefinitely.

A child’s life can be irreversibly changed by the existence of a record of sexual abuse. For many victims of child pornography, the fact that their photographs are available to the public indefinitely causes them to feel powerless, humiliated, and out of control. There has been a rise in the number of photos depicting cruel and brutal child sexual abuse.

Nemesis Market vows and works hard to ensure there are no vendors dealing with children-related explicit content on their market.

For the time being, Nemesis Market is still in the process of becoming better constructed and will require at least a few more months before it is completely ready for use. It’s possible that by then, it will have progressed to the point where it ought to have been when it first opened its doors.

Beware of bogus links to the Nemesis Market.

We admire the fact that it is trying something different, but we do not believe that anyone other than the most courageous should try it out on their own just yet. For the time being, we respect the fact that it is trying something new, adhering to their rules, and keeping vendors and clients safe from authorities. Soon, there will be a better supply to demand ratio, too.